Stop the judicial and police harassment against Frédéric Vuillaume

On May 20, the trial against Frédéric Vuillaume opens. In fact, it is the trial of the freedom to demonstrate!
We are happy that Amnesty International is addressing this attack on freedom of expression in France.
It is urgent that the trade unions and especially the one where Frédéric is an activist, the General Confederation of Force-Ouvrière Labor, take a firm position in support of our comrade. Unions, UDs and federations must demand the maintenance of the right to demonstrate and the freedom of union engagement.
Fighting all the injustices done to workers, whether in the streets, in companies and by any other means that we deem appropriate, is the very foundation of trade union action.

The Union of Anarcho-Syndicalists ,
and FO activists defending the Amiens Charter
May 18, 2021

I hope you are well 🙂
My trial is fast approaching, the pressure is mounting, I am afraid of forgetting things that I want to say and that are close to my heart to explain why I am in the street and why I have suffered this persistence.
Amnesty International campaigned on this May 20, 2021 trial, here is the link below:
https://www.amnesty.fr/actions-mobilisation/stop-a-lacharnement-judiciaire-contre-frederic-vuillaume

If you could share it and disseminate it massively so that the Dijon prosecutor would be inundated with emails, that would help me a lot for my fight for the right to demonstrate.

Thank you comrades
See you soon 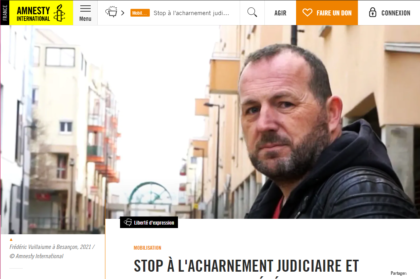 TRIBUNES: « The reform of unemployment insurance is unfair, absurd and indecent »

The relaunch of the government project is unfair denounce, in a forum in the « World », association and union officials, including Laurent Berger (CFDT) and Philippe Martinez (CGT).

Tribune. We, associations and unions of employees, reacted vigorously against the reform of unemployment insurance, when it was announced in June 2019 by the government. Due to the health crisis, certain points of this reform had been conveniently put on hold and the most optimistic among us could believe them abandoned. However, the government has just announced its implementation on July 1, 2021. This entry into force, even though the health crisis is far from over and its social consequences, already heavy, will only increase, is at the same time unjust, absurd and indecent.

Unfair, because it will strike people who are already vulnerable, who are among those who have been most affected by the health and social crisis. According to Unédic figures, from July 1, 2021, 1.15 million people will see their rights drop drastically, on average by 17 %, and up to 40% for the 400,000 most vulnerable. The most affected will be precisely those who have short or spaced contracts.

At a date not yet specified, other measures should tighten access to rights, in particular by raising the threshold for access to compensation, by requiring a period of six months worked, against four today. Here again, the most affected will be precarious workers, in particular young people under the age of 26.

Absurd, especially because it comes at the worst time. The analyzes of the scientific council of the National Council for the fight against exclusion are eloquent: they show, on the one hand, that the poorest people – in particular the unemployed – have been the hardest hit by the social consequences of the health crisis; on the other hand, that multiple layers of society have tilted or will fall into poverty, the crisis acting as a “social descender”; and finally, that the strength of our social protection system has averted an even worse catastrophe.

And it is at this moment, while we are still at the heart of the third wave of the epidemic, that the government will, by its very action, accentuate the effects of the crisis and plunge into poverty those who would have could stay the head above water if we had maintained the system of unemployment insurance.

Indecent, finally. Even before the health crisis, the purchasing power of the poorest households had already declined, mainly due to the freezing of housing allowances, family benefits and RSA; social inequalities had widened significantly. The crisis has accentuated this phenomenon, the better-off households being able to save, while the poorest 10% have most often had to go into debt.

If the government does not give up implementing its unemployment insurance reform, one of the last reforms of the five-year term will therefore attack precarious workers, reducing their rights and weakening their social situation. While at the same time, the purchasing power of the richest will not stop increasing, in particular because of the fiscal or social policies of the government. We are far from the most basic social justice.

This reform is finally part of a process of stigmatization of the unemployed, which does not correspond to any reality. Anyone who has lived through periods of unemployment has felt their stress mounting at the lack of response to the multiple applications, the discouraging interviews, the unjustified penalties for not having been able to prove this fruitless research. Anyone who has lived through periods of unemployment has seen the end of rights come with anguish, with the feeling that society considers you useless and that a section of public opinion suspects you of cheating … at the very moment when you are losing your last resources .

Far from the interests of the populations, can the government persist in pursuing such a reform, motivated essentially by financial considerations and which meets unanimous opposition from trade unions and associations, a reform which already had no? meaning before the health crisis and which, in the current context, becomes even more unfair and absurd?

Letter to the Anarchists

« We are moreover what they are not: rebels of every hour, men truly without god, without master, without country, the irreconcilable enemies of all despotism, moral or material, individual or collective, it is that is, laws and dictatorships (including that of the proletariat) and passionate lovers of the cultivation of oneself. » Read more